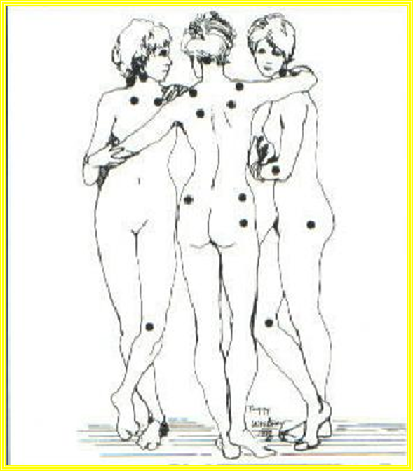 Fibromyalgia syndrome (SF) can be commonly defined as a uniform syndrome of widespread axial musculoskeletal discomfort, pain and stiffness, influenced by different factors (climatic conditions, physical activity, psycho-physical distress). It is associated with symptomatic sleep disturbances and occurrence of multiple tender points (well defined points of tenderness) (1,2), with no blood and radiographic alterations. Recent data showed that SF rises to the 2nd-3rd place among rheumatic diseases, with a prevalence between 12 and 20% (3).

The etiopathogenesis of SF is not clear yet. It has now been determined how a qualitatively poor sleep can sustain it and it has been demonstrated the presence of non-REM sleep disorders at the EEG (4) that prevent normal hypnic activity. In recent years a multifactorial vision has increasingly gained credit, by highlightening the functional impairment of the anti-nociceptive system (that involves the “down-regulation” of pain, mediated by endorphins) (5), and the levels of serotonin and the deficiency of its precursor tryptophan (6). The frequent association with functional disorders such as tension-type headache and irritable bowel syndrome, but above all the high influence of anxiety and mental stress on pain represent a symptomatic set that has suggested to many researchers the pathogenic value of the psychological status of the patient.

The therapeutic approach is still variable and often inadequate. Anti-inflammatory drugs have mild efficacy and short duration (7), and those with strong analgesic activity are recommended. Tricyclic muscle relaxants and antidepressants, major and minor, are used with greater success (8,9,10,11). We have recently found some reports in the literature on the use of acupunctural reflexotherapy (RFA) in SF (12,13,14). This complementary technique has the property of intervening in the regulation of the anti-nociceptive system and in its neurochemical and physiological rebalancing. Moreover some authors have already shown that RFA increases the pain threshold (15,16). For these reasons, we decided to verify its usefulness by comparing the results with those of a low-dose antidepressant, mianserin (M), given that the effectiveness of this class of drugs in SF has already been demonstrated, as mentioned. We also researched the possible presence of their synergistic interaction.

We studied 42 consecutive female patients, who came under our observation since November ’91. They were affected by primary SF, according to the classification criteria of American College of Reumatism ’90. Only 32 of these reached the end of the treatment: mean age was 51.59 ± 9.28 (range 22-64), mean duration of pain 12.02 ± 8.89 years, mean number of tender points 13.5 ± 1.9.
All patients underwent a basic clinical examination for the diagnosis of SF and for the exclusion of other rheumatic, respiratory, cardiac or dysendocrinopathy diseases. Possible alterations of the sensory in patients with chronic therapy with psychotropic drugs, major and minor tranquilizers, induced their exclusion without an adequate wash-out.

For each subject, the following clinical-instrumental evaluations were performed.

1) Pain assessment with McGill Pain Questionnaire (MGPQ)(Italian version), aimed to specify other pain qualities in addition to intensity (17).
2) Huskisson test (0-10), graphic method recognized to be the most sensitive method for measuring acute pain (18).
3) Pressure algometry (Kg/cmq), with an algometer according to international standards.
4) Electrical algometry (mA), with constant current electrostimulator.
5) Total weekly hours of sleep and pain, according to a score table proposed by Pozzi et al. (19,20);
6) Psychological status through the questionnaire for depression IPAT CDQ (Sten 1-10), psychometric test based on 40 items (statements) (21).

We performed a randomized controlled trial, allocating patients in one of the following three therapeutic groups: A) RFA, B) M, C) RFA + M. The study involved a ten-week treatment with a complete evaluation, before and after therapy and a follow-up at 1, 3 and 6 months. The assessment of McGill Pain Questionnaire score and electrical algometry was blind.
In the RFA groups, a therapeutic scheme common to all patients was used, consisting of 5 bilateral points: LR 3, ST 36, BL 62, 6 PC, 3 SI; each session lasted about 20 minutes and was always performed by the same doctor.
The dose of mianserin, a new drug similar to the most common tricyclics, ranged from 15 to 60 mg; in association with RFA, doses higher than 30mg were not administered.

We performed the statistical evaluation with appropriate tests to compare the results. In particular, for each therapeutic group, the modification of the baseline, at the end of therapy and during the follow-up, was studied with the “Student T-test” for paired data; the mean of the values ??obtained at the end therapy and during follow-up for the three therapeutic groups were compared to each other by means of “Student’s T-test” for unpaired data.

During the treatment 4 patients left the study due to non-related reasons; 6 patients did not complete the course of therapy: 5 for intolerance to M (2 for gr. B, 3 for gr. C) with an intolerance rate of 20.8% (IR), 1 to RFA (gr. C ) with a IR of 3.8%.
The mean scores at the basic controls, at the end of the therapy and during the follow-up, regarding the pain and the psychological assessment, and any statistically significant improvements are highlighted in the TAB. 1. During the follow-up, the therapeutic inefficacy, considered as a recurrence of the symptoms, can be estimated at the 6th month as follows: gr.A * 14.2%, gr.B * 20%, gr.C * none.

Our study seems to have contributed to highlighting some interesting and partially unpublished data. Data currently available in the literature on the efficacy of RFA are rare, given the recent application of this technique in western medicine and in planned research studies (12,13,14,22).
The almost complete absence of side effects during and after the application of RFA highlights the advantage of this technique compared to the main mentioned pharmacological treatments of this syndrome.

In this study the compliance of the patient has almost always been good, often improving over the course of the therapy, due to increasing participation of the patient and the improvement of the physician-patient relationship.
By examining the data obtained from our study more closely, we can observe how, at the basic control, the pain threshold was lower than normal, both if stimulated with a pressure algometer, and with an electric algometer (23). Furthermore, the scores of the MGPQ and the Huskisson test are at medium-high levels.

The psychological study, performed with the Krug and Laughlin questionnaire, showed the presence of depression in almost all patients, in 81.5% higher than the mean of the normal population (Sten 5.5 ± 2.0) (21). Finally, in 60.5% of cases the score confirmed a severe depression (Sten 8-10).

Dropouts due to personal reasons or intolerance towards treatments, as already mentioned, resulted in a lack of homogeneity of the therapeutic groups, despite the predetermined random distribution, as regards to the mean age and the mean duration of pain of the patients.

The data obtained from the comparison of the means before and after the treatment showed an improvement in all the endpoints of the study of pain and the psychological state, at the end of therapy and during the follow-up. Significant results have been demonstrated in 6 out of 7 of them in group A, 3 out of 7 in group B, in 6 out of 7 in group C.

RFA therefore seems to be useful in SF, with an apparently superior efficacy to that of M and with a high compliance; low-dose M has not shown significant synergic action compared to RFA-only therapy in the treatment of pain, while their concomitant use seems to be useful in improving sleep and depression of patients with SF. The 6-month follow-up allowed us to observe a lasting benefit, although with a decrease of the scores over time. However, we do not consider that a negative element, given the well-known chronicity and the difficult therapeutic approach to SF.

Finally, we believe that these data can be further confirmed with an additional enlargement of the case study and follow-up, to give new information both on the efficacy and on the actual duration of the proposed treatments.